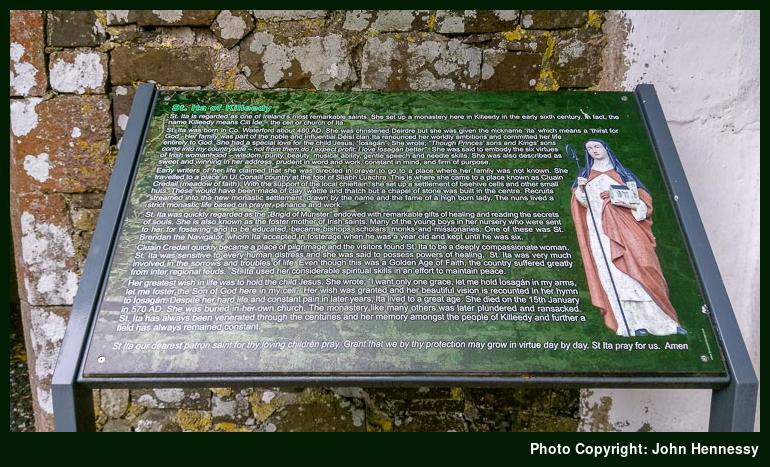 The memory of Ita has been venerated in the hearts and minds of the people of Killeedy and surrounding parishes on her feast day of January 15th down through the centuries. More recently, the day has been a parish holiday and mass is con-celebrated in the church at Raheenagh. The attendance at this mass became so great that some attendees were left standing outside in the chapel yard, braving unpleasant winter weather as they did so. Thankfully, the overflow from the chapel now can be accommodated in the community hall built on the site of the old primary school. The mass is then relayed from the chapel to a large screen in this building to accommodate the attendance there.

There is more Ita's memory than even this. After all, it has pervaded a national history with plenty of unpleasant episodes involving war, torture, famines and religious oppression. For one thing, many Irish women bear the forename Ida or Ita and her name is part of of numerous place names too. Apart from Killeedy and and the West Limerick village of Kilmeedy, there is about an acre of land up on the Tournafulla hills, called Boolaveeda (St. Ita's dairy, in Irish), that is said to have been her monastery's dairy with an enclosing wall and a building on site. The milk was delivered daily in two containers strapped at either side of a donkey that is said to have made the journey without a guide between the dairy and the monastery. Her memory also goes beyond West Limerick to Cork city because of the association between St. Ita with its founder St. Finbar and there is a painting of her on a stained glass window in the Honan Chapel in University College, Cork that commemorates the link.

The monastery school at Killeedy, which flourished in the time of St. Ita and continued as a learning centre for many years after her death, sadly was not treated well by history and its ruin now is to be found in the sizeable local graveyard near Raheenagh. It is not known when the nuns vacated the place but let's hope they had left before the invasion by the Danes. In the year 845, one of their companies sailed into North Kerry and, after having settled there for a while, they began advancing inland in search of anything worth plundering. This activity also involved the slaughter of religious people and monks. This devastation extended all the way to Killeedy where they engaged in robbery and plunder before burning any buildings. In 857, more Danes sailed into the North Kerry coast and these too attacked and plundered Killeedy, leaving the place in ruins.

The monastic ruin, which is now part of a large cemetery dotted with graves and headstones, is visited during to this day by pilgrims who come to pray and do rounds. This customary practice starts from the shrine with a decade of the rosary before it is continued while around the cemetery to finish at the starting point again where petitions are placed for the intercession of St. Ita.