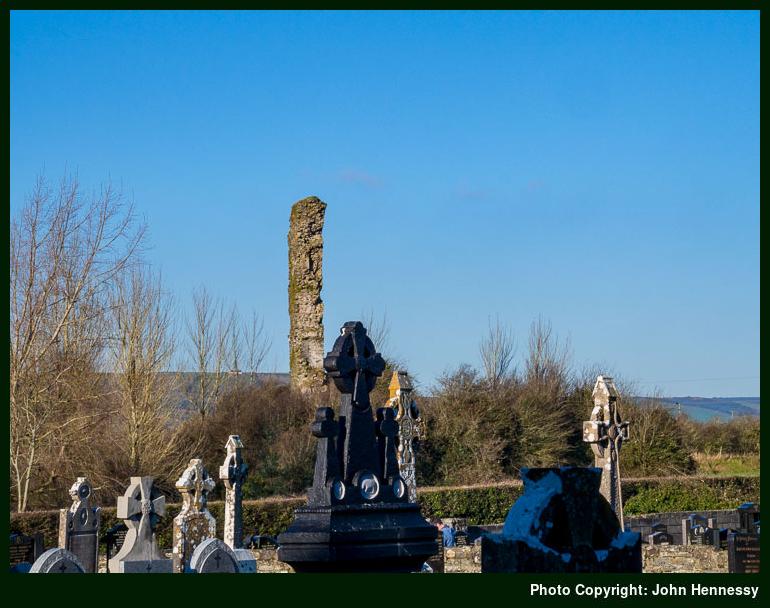 Just a short distance away from the ruins of St. Ita’s monastery in Killeedy, Co. Limerick are the ruins of an historic castle known as the Castle of Clean Glass. Though it is a much later structure, that has not stopped a legend arising that it was built by a local chieftain for the purpose of protecting Abbess Ita and her monastery. This can be discounted because it was built by the Order of Knights Templars, from the Norman period in Irish history. While we do not know the date on which Killeedy Castle was built, a number of others were built in West Limerick by the same organisation. One is the well kept Desmond Castle found near the square in Newcastle West and that was built in 1184. They also built a preceptory (or fortress) in Ballingarry, Co. Limerick in 1172. With both of these constructions having known dates, it is reasonable to assume that Killeedy castle was constructed around that time.

The Knights Templars had been making their way into Ireland before being identified as an order since they had been coming as individual soldiers with different Norman armies. The Norman invasion of Ireland, which took place in the years 1169 and 1171, seems to coincide with the official arrival of the Knights in Ireland. They soon established extensive estates in different parts of the Island. Many of the sites of places occupied by the Templars can be identified today by existing place names. For example there was a Knights temple at Ballintemple, Co. Cork and, near Hook Head in Co. Wexford, Templetown is to be found. However, this does not mean that every place name bearing the word temple had any connection with the Templars. For example, there is nothing to suggest that they had any association whatsoever with Templeglantine, a village about five miles west of Killeedy.

The Templars had peace for a while in Killeedy Castle until they were attacked by a local chieftain named Mahon O Coilean (or Collins) who, with his army, won a short battle and took possession of the castle. Mahon O Coilean became Lord of Cleanglass but had a tragic end when his wife stabbed him to death while asleep in his bedroom in the castle in an act of jealousy. After Mahon’s death, his castle territory was taken over by a branch of the Geraldines who became Lords of Cleanglass and one was elected Chief of the Tuath.

After the loss of Killeedy Castle, the Templars then moved to the village of Strand at the foot of Glenmore in the parish of Monagea. This neat sheltered little village can claim another feature of historic importance because from the village there is a gateway leading to a pathway extending uphill by the glen to Clash an Aifreann, a recess in the hill where Holy Mass was offered in secret during the Penal Times by a persecuted priest. In the village, the Knights built a Temple and its ruin was demolished recently to make way for new homes. Until that demolition, there remained a high stone wall which was used as a handball alley. This was known locally as the church wall which may have been the surviving part of the Knights' Temple.

Sometimes, questions are asked about the Knights Templars and their objectives. They were a part of a Crusade begun in the year 1118 in Jerusalem that consisted of warrior monks who took oaths and dedicated their lives to protect the Holy Land and especially pilgrims. They adopted an austere and ascetic way of life such as that lived by the Cistercian order. Other than that, they depended on the sword to achieve their goals. They were recognised officially by Pope Innocent II in 1130. Then, the order spread rapidly in strength throughout the world. This reached the point where they accumulated such wealth that they became money lenders and bankers. This would be a venture that eventually led to their downfall.

In France, the Templars created a vast empire under King Philip, the country’s ruler. In times of financial need, he borrowed large sums of money from the Templars. By now, they had set up a very vast and unique banking system that was attractive to wealthy people. Investors could bank money in any of the monasteries or preceptories of the Order, for which a letter of receipt would be issued. This enabled the investor to withdraw a portion or all of the investment from any of the Order’s preceptories in any part of the world on presentation of the official receipt. This success began to have an effect on the life of the Masters and leaders of the Order that led them away from the pure ideals of its foundation.

This decline in reputation was seized on by King Philip of France because he owed the Templars so much money that he could not afford to pay the debts. Using the now widely known disrepute of the Order, he sought the support of the Pope to suppress and annul it completely. On October 13th 1307, King Philip ordered the arrest of all Templars across France and had their property seized. Subsequently those arrested were charged with idolatry, homosexuality and numerous other religious crimes. Upon conviction, their leaders were sentenced to torture and burning at the stake. Furthermore, the Pope was urged by the king to have all Templars across Europe arrested. This eventually became a threat of war against the Pope and the pontiff dissolved the Knights Templar in 1312.

In England, King Edward II found himself in a much similar situation to King Philip of France with the growing numbers and influence of the Templars. In turn, he suppressed the Order and confiscated their property while also imprisoning those guilty of serious crimes. Nevertheless, many Knights lived religious and monastic lives honouring the vows of celibacy, poverty and humility and were accepted into religious orders, many conforming to the Cistercian way of life.

The actions King Edward II also extended to Ireland issued an order on September. 29th 1312 to have all the Knights arrested to be held in custody in Dublin Castle to await trial. The trial of the defendants was conducted in Dublin before Friar Richard Balybyn of the Order of Dominicans, a Dominican lecturer named Friar Philip de Slane and Friar Hugh St Ledger. Among the witnesses were a Franciscan named Roger de Heton, a lecturer named Walter de Prendergast, an Abbot named Thomas, Simon Prior of the Abbey of St. Thomas the Martyr and an Augustinian named Roger. While the evidence against the Knights was weakly presented, they still were condemned and lost all their property. These extensive holdings were taken over by the authorities for distribution to selected supporters of the Crown. The trial was soon followed later in 1312 by the abolition of the Order of the Knights Templars and was the tragic end of an institution that mushroomed in a few years to astonish the world. Then, because of its fall from virtue to vice, it went from riches to rags and fell from exaltation to extinction.